After the intensive week of working with singers up at Samling, it has been back to chamber music in abundance for a couple of weeks! Last week saw a recital with flautist Thea Cramp (colleague on the visiting music staff at Eton) as part of the lunchtime series at Windsor Parish Church. Tomorrow will provide a pleasing excuse to visit Winchester (where I worked for my gap year), giving a concert for the Friends of the Cathedral's 80th anniversary with Alexandra and Charlotte Reid (violinists). As usual we are mixing up some staples of our repertoire (a Handel trio sonata, the Martinu Sonatine) with some new pieces (a vibrant Haydn sonata and the virtuosic Muskowski Suite) as well as taking the chance to revisit Jon Galton's The Awakening which we premiered last year. Meanwhile, time is also filled with rehearsing for Sunday's concert in Cambridge with cellist Cara Berridge (Schumann and Rachmaninov – no shortage of semiquavers…), revising the Dvorak Piano Quintet for the next Music at St Peter's concert later this month, and preliminary rehearsals with clarinettist John Slack for a concert in Germany a couple of weeks later (Mozart, Debussy, Brahms…). Phew! 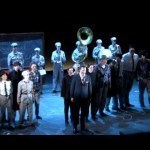