Clara Schumann, born Clara Wieck, was one of the most distinguished pianists and composers of the Romantic era. In this her 200th anniversary year we weave a tapestry of song and piano music by the composers with whom she surrounded herself, featuring outstanding song singers Aoife Miskelly and Katie Bray, as well as some of Clara Schumann’s own beautiful piano works, played by renowned pianist Martin Roscoe.

We hear extracts from Robert Schumann’s wedding present to her, the song cycle Myrthen, as well as songs by Brahms, her closest friend and con dante. The composers whose music she regularly performed included Liszt and Chopin, and we set these alongside Schubert – reuniting Martin Roscoe and Libby Burgess after their Beverley Chamber Music Festival duet concert, for a performance of Schubert’s A major Rondo. Both Fanny and Felix Mendelssohn also feature, the latter’s fiery and lyrical Piano Trio in D minor bringing the festival to a close in a blaze of virtuosic energy. 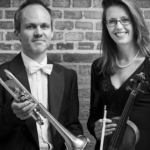 CantiaQuorum: An American in Paris
Scroll to top