Tonight’s concert pairs masterpieces inspired by passion and devotion. Schumann’s concerto is one of the high points of the entire Romantic movement, an outpouring of heartfelt melody in which Schumann channelled his longing for Clara Wieck, whose father at first refused him permission to marry her. This much-loved work is followed by Berlioz’s wild and still-extraordinary Symphonie Fantastique; a series of beautiful and macabre visions haunted by the image of the actress Harriet Smithson, with whom Berlioz was infatuated. They married three years after the work’s first performance. 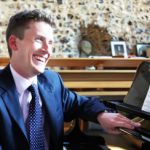